The following are cast pictures both on stage and off stage from the 2013 Shakespeare Festival.  Also included are some of the many students and staff who helped to make the Festival a success.  Photos were taken by Georgia Panagiotidis, Jace Williams and Sarah Margolis.

For a summary of the Shakespeare Festival go to Veritas News here.

Leah Decceco and Jace Williams, the cast of Othello 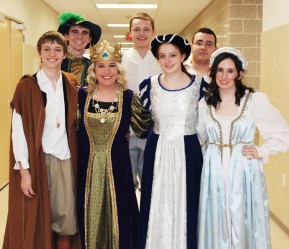 Left to right: P.J. Butler, Brian Leonard, Jackie Carlson, Bob Gasdia, Ella Engle, Jean DeSilva and Nicole Cook, the cast of As You Like It

Haley Macray and Ms. McDonough handled gave out and collected the costumes.

The servers of the medieval feast were led by Mrs. Patton.

The King and Queen of the Festival: Mr. Retchless, Superintendent of Schools and Mrs. Fleming, Consumer Science teacher. 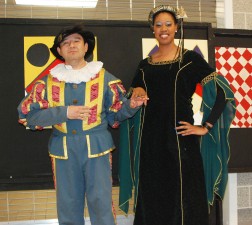 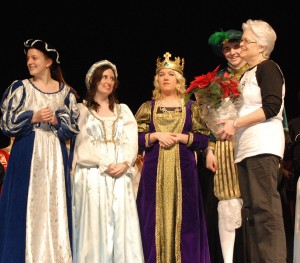 Mrs. Woodward, director of the Shakespeare Festival receives poinsettas from her cast.

Principal Cron leads the procession from the banquet.

Mr. Chad Bigsby plays the Court Jester during the banquet part of the Festival.

The band and chorus process into the cafeteria.

Members of the chorus performed exquisitely on both nights.

Mr. Cron, the sackbutt player for the court.

The next gallery shows the players in action on stage on Friday and Saturday nights. 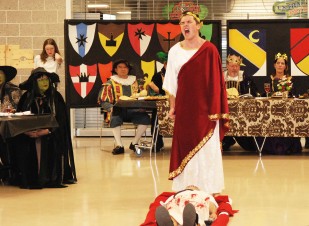 David Wook and Leshon Crawford carry the body of Caesar into the forum.

Kylie Langhoff as a citizen;

Mark Anthony (Chris Catania) turns the crowd against the conspirators. 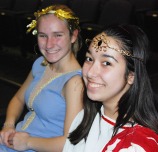 Leah Dececco plays Brutus in this scene from Julius Caesar 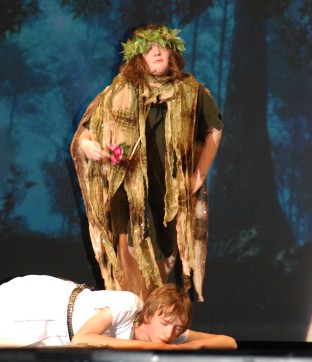 Marissa Labelle as Puck and Leshon Crawford as Lysander.

Leshon Crawford as Lysander and Lilly Margolis as Helena. 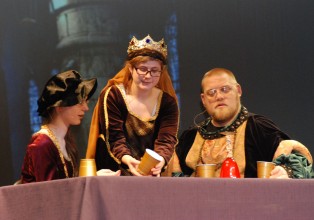 Kaitlin Mott, Olivia Olsen and John Mott in the banquet scene from Macbeth

Leah Dececco plays Iago in a scene from Othello

Iago persuades Roderigo in a scene from Othello

Duchess Frederica (Jackie Carlson) and Orlando (PJ Butler) in a scene from As You LIke It. 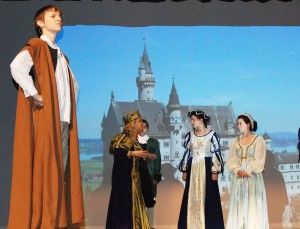 Chris Landy and John Kamande in a scene from Henry V.