This year, Project Pumpkin had over 400 visitors that came to enjoy activities such as indoor trick or treating, face painting, and games in the gym area. Students at Rockland High School, mainly members of Student Government, showed their support to the event by volunteering and dedicating their time. Students dressed up in costumes to hand out candy to the trick or treaters, and helped organize the gym to allow for safe and enjoyable times for the guests. Some students even dedicated their time to help in the haunted hallway, which gave visitors a spooky experience.

Visitors were also able to receive a discount for one dollar for every can brought in. This fundraiser allowed for Rockland High School to raise canned goods for the food drive this month.

Here is a video and some pictures from this year’s Project Pumpkin! 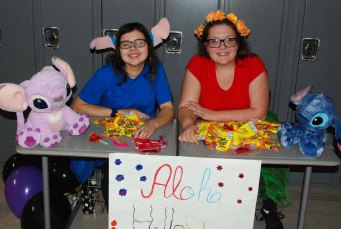 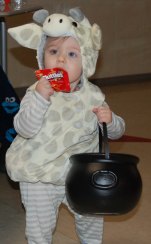 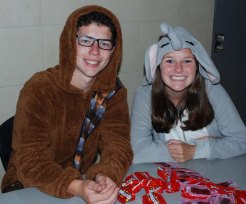 Mr. Harrison’s daughter Peyton has her eyes on the next table of candy. Veritas photo

Selena Martinez with her sister.

Abby Moran and Emily Gaboriault are ready for the trick or treaters on Sunday, Oct. 27 at Project Pumpkin.

Hissam Dubois and an anonymous character. 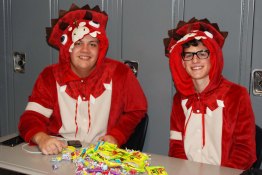 There were over 400 who attended Project Pumpkin on Sunday, Oct. 27. Veritas photo 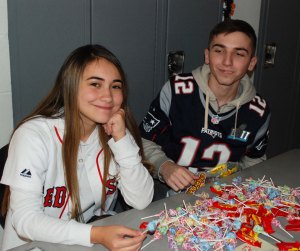 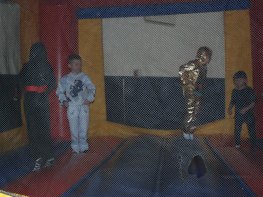 The bouncy house attracted many in the gym. Veritas photo

Xavier Bryan gets his face painted.

Xavier Bryan, age 3 who goes to the Rockland Pre-school.

On Saturday, Oct. 26, six new members were added to the Rockland High School Athletic Hall of Fame.   Athletic Director Gary Graziano hosted the dinner and induction ceremony that was held at the Rockland Golf Course.

Each inductee was introduced by a former coach, teammate or sibling.

Kenny Klier who introduced his brother Kevin described Kevin’s dedication to golf and his success in high school, college and on the amateur and professional circuit. After high school, Kevin received an athletic scholarship for golf to Temple University where he was then inducted into their Hall of Fame in 2016.

Former boys basketball coach Bob Fisher introduced Peter Foster and spoke about his legendary prowess as a basketball, baseball and soccer player at Rockland High School.  Foster went on to play basketball and baseball at West Point Academy, and now works for the Disney Corporation in Florida.

Fran Cook was introduced by John Spinale, his teammate, who spoke about his great success as a track athlete at Rockland high School in the 1940’s where he was undefeated in both track and cross country in his four years at Rockland High School.  He held the course record in Rockland, Brockton and Franklin Park for many years.

Former girls basketball coach Mal Lannin-Cotton introduced Courtney Burns. She described Burns’ dedication to basketball, leading Rockland’s teams to three Patriot League championships. Burns played at Rhode Island College, and since then has become the head women’s coach at Mitchell College in New London, CT. She was voted Coach of the Year in the New England Collegiate Conference in her second year as a head coach.

Rick Phelps introduced his brother Jeffrey and spoke about his accomplishments as a football player at RHS under coach Ken Owen.  Jeffrey went on to play at Colby College and is a successful businessman in Rockland, taking over the Amos A. Phelps Insurance for his father, Richard Phelps who is a Rockland School Committeeman.

Tom Ryan was introduced by Chuck McDonald, RHS football coach and Ryan’s teammate.  McDonald described Ryan’s work ethic as a baseball and football player at RHS.  He was a three year starter in football, a captain and an Enterprise all-scholastic.  At Springfield College Ryan was a three year starter where he captained the team that reached the NCAA Division 3 Elite 8 in 2000. After several years as defensive coordinator at Tewksbury High School, he has been the  head coach at Methuen High School since 2013.

All of the inductees after accepting their plaques spoke about the influence that growing up in Rockland had on their lives. They also described how their participation in sports, and in particular the influence of their coaches at Rockland High School, had put them on the path to successful lives.

Gary Graziano concluded that this is one of the best classes of inductees that he has presided over.

Since 1988, Rockland High School has inducted 78 student-athlete alumni to the Hall of Fame, as well as four former coaches as honorary members.

Nominees for the Hall of Fame have had outstanding athletic accomplishments during and after high school. They also have contributed to their communities, and in some cases have overcome adversity during high school or later on in their lives. They must also be at least five years out of high school.

Anyone may nominate a Rockland High School graduate for consideration for the Athletic Hall of Fame.  To do so, contact the athletic director at graziano@rocklandschools.org. 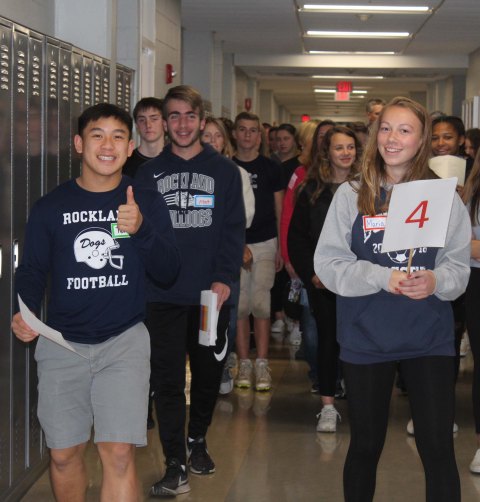 Rockland High School held its annual Grade 8 Open House and Welcome Night on Weds. Oct. 23 from 6:15 to 8:00.  About 120 eighth graders and their parents attended.

Eighth grade students and their parents were first welcomed by Principal John Harrison to the auditorium where they listened to several students speak about the many highlights of the Rockland High School experience.  Jordan Cunningham spoke about the many areas of academics and activities that students can explore which he has taken advantage of.   Hannah Wyllie discussed her involvement in the environmental club and the Rubik’s Cubers club as well athletics.  Maddie Gear talked about her opportunities gained in the Travel Club.

After the presentation in the auditorium, RHS students led tours throughout the building to various “stations” where classroom teachers, coaches and club advisors explained the many offerings available to students.

Principal Harrison said, “I thought the staff did a great job and I think our student helpers made us proud. There was a nice energy in the building.”

Paul Gilpin and Lara Glennon at the World Languages and Guatemala table.

Jordan Cunningham talks about the many opportunities presented to him at RHS.

Kiara Miguel and Austin Clarke were at the Veritas station.

Mr. MacAllister speaks to the group about the Social Studies courses.

From left: Jordan Cunningham, Hannah Wyllie, Mrs. Shaughnessy, Maddie Gear, Emily Gaboriault and Mathew Bruzzese and Dante Vasquez were among the speakers in the auditorium presentation.

The annual Project Pumpkin is taking place again for the 2019 Halloween Season. This Sunday, October 27, 2019, Rockland High School is running a fun filled indoor trick or treating opportunity for children. Along with indoor trick or treating, children will have the opportunity to play games and do face painting in the school gym. The haunted hallway is another highlight of this fun filled event.

The time of the event is 5 to 7 pm. For every canned good brought, one dollar will be removed from the admission price. The prices are $5 for a child, and $2 for each additional child. For the whole family, the price is only $10. Parents are free!

Rockland encourages everyone to attend this fun event! Here are some pictures from last  year.

There were plenty of lollipops for everyone!

Annie was at Project Pumpkin 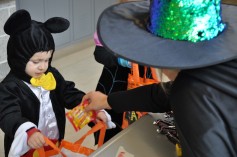 Mickey Mouse claiming some candy from an RHS witch. photo by Arianna Esposito

Devil Alanna Gray and Cameron Campanile in the stocks. photo by Danting Zhu 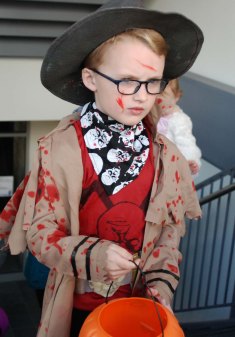 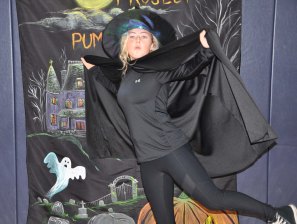 Member of the Haunted Hallway gearing up the spook the littles. photo by Danting Zhu

Members of the Haunted Hallway crew posed for a scary good time. photo by Danting Zhu 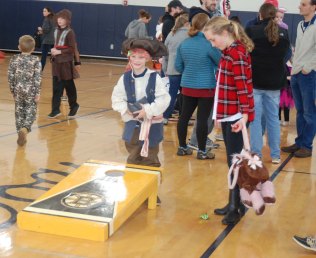 Pirate plays game in the gym. photo by Danting Zhu.

Children playing at one of the gym’s activities 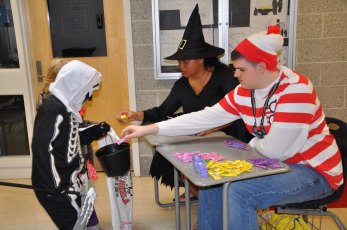 A little fireman helps himself to some candy. photo by Ari Esposito

Jessie DeMarco and Stephanie Beatrice add candy to the bags of trick-or-treaters. photo by Ari Esposito 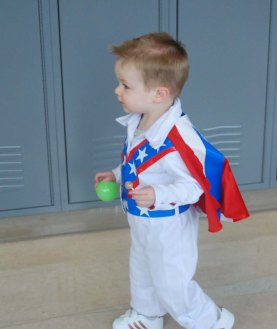 Ms. McDonough’s son James is having a ball at Project Pumpkin.

Welcoming the Class of 2024 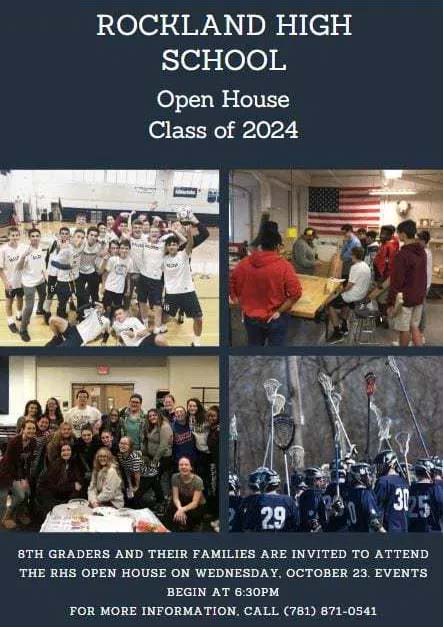 The agenda for the evening will be as follows:

6:30 PM Opening Remarks and Brief Presentation in Auditorium from Students, Faculty, and Administration

7 PM-8:10 PM Tours Throughout the Building

Teachers will be available in their classrooms to talk about the different courses of study.
Members of the guidance staff will also be able to answer specific questions that parents may have. 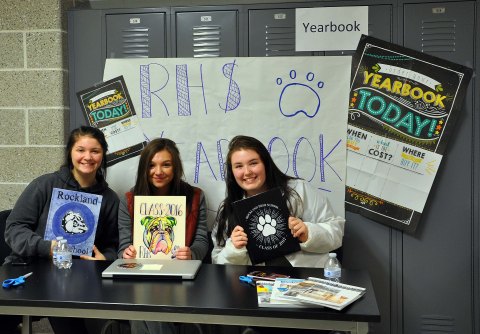 Students, advisors and coaches will be available to talk about various clubs, activities and sports that are available to students. There will be  sign-up sheets for Grade 8 students to express an interest in participating in a club, sport or activity.

It’s been a great fall season for the RHS football team. Not only have they won seven straight games, but their coach, Mr. Nick Liquori was recognized as the Coach of the Week by the New England Patriots after their 35-0 win over Medford on Oct.11.

The team has been victorious this year with an undefeated record of 7-0. The defense has allowed only 7.6 points per game while their offense is averaging 30.6 points per game.  Combined with the team’s six victories to end the season last year, the Bulldogs have the best winning streak in the area.

Their 14-7 win over Norwell last Friday night at Norwell gave them the South Shore League Sullivan Division title. In that game senior Dante Vasquez rushed for over 200 yards and 1 TD. Tom McSweeney also had a TD.

Now the Dogs will wait to see who they are matched up with in the upcoming Division 6 South play-offs that begin on November 1.

Mr. Liquori’s honor was presented to him by former Patriots linebacker, Andre Tippett, on Tuesday, Oct. 15. The entire team and coaching staff were present in the gymnasium during the presentation. A $1,000 donation on behalf of the Patriots Foundation, was also made to the Bulldogs in honor of Coach Liquori.

The presentation was featured on the Patriots weekly television show, “Patriots All Access,” which aired on Friday night, Oct. 18 at 7 p.m. on WBZ-TV. It is available on Patriots.com. Go to minute 23:54 to see the clip.

Veritas staff reporter, Austin Clarke, sat down with Coach Liquori in our studio to talk about the football team, the season and his honor.

Toward the end of the 2018-2019 school year,  student government advisers, Joanne White and Jill Delaney announced they would be departing from their positions.

Mr. Rowe states that he initially said no to the position, due to many other commitments, but with Mrs. Bartoloni’s help he felt he could take on the role.He said, “My favorite part is all the excitement. It really shows that you kids want to make an impact.”  A big goal of his, he says, is to achieve gold council status at this year’s MASC conference.

SGC President, Katy Buckley and SGC Vice President, Maddie Gear both agree that the advisers are doing a great job and they both are clearly hard working people. They said that both advisers have done so much for the council already due to their great energy.

With it being their senior year, Buckley and Gear would like to leave a mark on the council such as growing in numbers and becoming more organized.

Buckley said, “I want to make student council the place to be at Rockland High.”

One thing that Mrs. Bartoloni has done is to include the middle school student government members in one high school activity a month.  The first one was the fundraising activities and the walk to support breast cancer awareness.

The RHS and RMS fundraisers for breast cancer took place the last two weeks of September and raised a record of $5,750 for the American Cancer Society.

On Sept. 29, 150 students from the high school and middle school went into Boston for the Strides Against Breast Cancer Walk.

The next big event for the student government will be Project Pumpkin which is scheduled for Sunday, Oct. 27 from 5 to 7 p.m at RHS.