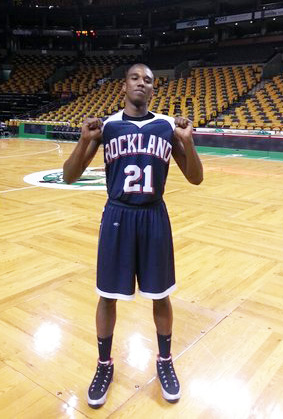 Tyler Gibson, one of Rockland’s finest basketball players, on the parquet at the Garden!

After an exciting season of basketball, annual post season awards are handed out to those who rightfully deserve them. Rockland, who won the South Shore League title also had individual players who received some awards. Bryan Tavares, Matt Nicholson, and Tyler Gibson each brought home All Scholastic Honors.

Gibson, however, who will play Division I college basketball at UMass Lowell next year, received handfuls of awards including South Shore League MVP, Enterprise All-Scholastic, Boston Herald Hot Shot, and Boston Herald Dream Team. He also was named a Boston Globe All Scholastic, a member of the Boston Globe Super Team, the ESPN Boston All-Defensive Team, and the ESPN Boston Super Team.

Of all the awards the most prestigious is the most recent, the Massachusetts Gatorade Player of the Year. This award has been won by current NBA stars in their respective states, including the likes of Dwight Howard and Paul Pierce.

“He was this scrawny kid as a sophomore,” said Rockland coach Fred Damon. “He never gave up and through a lot of hard work, two years later he’s the Gatorade Player of the Year. When you’re facing double and triple teams but still average almost 22 points and 16 rebounds a game, you can really understand how dominant he was.’’

When asked how he feels on taking home this award Gibson said, “It’s an awesome feeling to be the first student-athlete ever in Rockland history to win this award.” Gibson, who is happy with his choice to return to Rockland for his senior year instead of attending prep school is overall happy with his success as well as the team’s.

While Tyler is happy he came back, as a fan of his and of the Bulldog team, I am glad he came back too.

Here is a video of a memorable season and player, we will not soon forget. 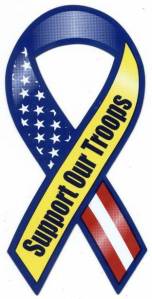 Until April 5, 2013, the National Honor Society will be collecting items to send to a Rockland alumni’s troop currently stationed in Afghanistan.

By donating items, you are also supporting the Rockland community, as the packages will be delivered to an alumni’s unit.

So, take a look at the list of items and donate what you can. If you have any questions, you may contact Sonya May, National Honor Society member, Ms. Paulding, or Ms. Black, advisors of the NHS. 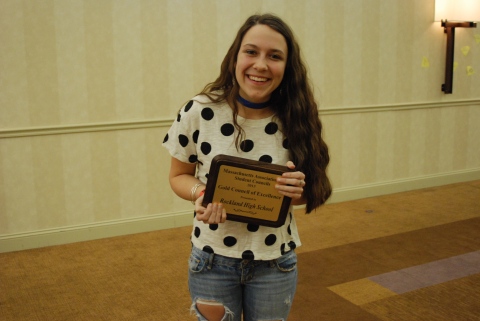 RHS’s Student Government Council’s last day at the Massachusetts Association of Student Councils was on Friday, March 8, a snow day for the high school. The 20 students who attended had a great time but were glad to get home. Follow this link for the photo gallery of the last day at MASC.

Time For Seniors to Apply For Scholarships

Seniors can apply to two different scholarship sources: the Citizens Scholarship and Rockland High School Scholarships. Both applications are due in Guidance by 2:30 p.m. on March 28th.

Seniors are encouraged to fill out as many applications as apply to them, and to be sure to get started as soon as possible so the March 28th deadline is met.

Also, a quick reminder that Rockland High School computers, printers, copiers, etc. are forbidden to be used for scholarship applications.

If you have any questions, ask someone in the Guidance office for help.

It’s time for seniors to apply for scholarships! 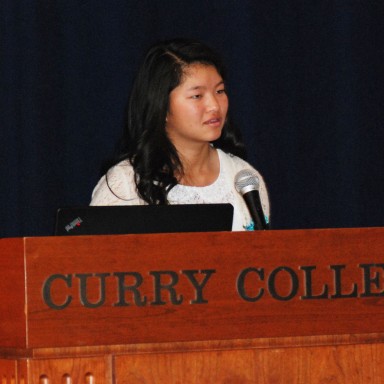 Megan Khang, sophomore at RHS spoke about some of the keys to her golfing success at the Leadership Conference on Tuesday, March 12. Photo by Georgia Panagiotidis.

Twenty-one sophomore and junior girls attended a Leadership in Action conference at Curry College on Tuesday, March 12. The conference was sponsored by the Women’s Business Connection of the South Shore Chamber of Commerce.

RHS sophomore Megan Khang started the conference with a keynote address in which she talked about her experiences as an accomplished golfer. Megan qualified for the U.S. Women’s Open last summer at the age of 14. She also explained that her experience has taught her to work hard and reach for her goals.

After the keynote speech, the participants broke up into four groups and attended seminars on the pros and cons of social media, how to become more organized and accomplish your goals, the value of relaxing and focusing your energy, and the importance of a healthy lifestyle in achieving success.

After lunch in the Curry cafeteria, the conference ended with a panel discussion that was led by TV personality Kim Carrigan. The women on the panel, all successful in different fields such as law enforcement, politics, health and fitness management, and manufacturing, inspired the girls with their stories of success, but also the “speed bumps” they had to go through to achieve their dreams.

The following link from the Patriot Ledger includes an interview with junior Georgia Panagiotidis.

The Rockland group at MASC Day 2

Rockland High School’s Student Government Council continued to attend workshops and listen to speakers at their second day at MASC!

The Rockland group is ready for the semi-formal.
Photo by Georgia Panagiotidis

Chris Catania having fun on his break from campaigning.

Rockland High School’s  Student Government Council (SGC) went down to Hyannis from March 6th to the 8th for the annual Massachusetts Association of Student Council’s (MASC) conference. Veritas photographer, Georgia Panagiotidis, a member of SGC documented the first day in which RHS students participated in lots of fun activities while getting to know each other and students from across Massachusetts. For more photos from day one, follow this link.