RHS Has 10 years of POL Success

Over the past ten years, Rockland High School has been quite successful when it comes to student participation and recognition in the annual nationwide Poetry Out Loud competition.

Poetry Out Loud gives high school students the opportunity to perform poems of their choice at the school, regional, state, and national levels.

Since its start in 2006, RHS has had students participate in POL every year. This year RHS received a certificate for being the only 10-year school in its semi-region. Not only has RHS participated all ten years, but the school has also had many winners at various levels of the competition. 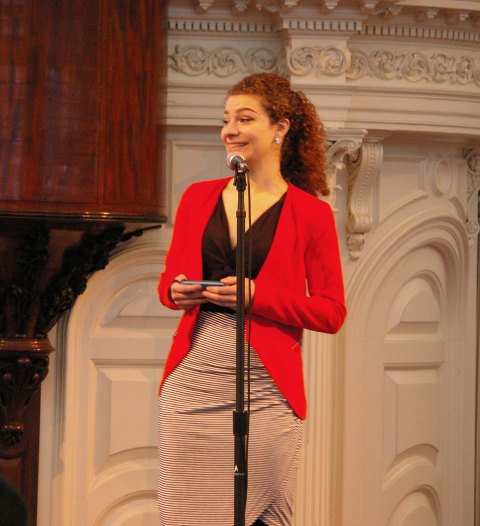 Gabrielle Guarracino, served as one of the judges at Poetry Out Loud State Finals Sunday. Here she advises the contestants to keep their love and study of the arts strong no matter how impractical others label them.

Out of the ten years of POL, RHS has been represented in the state finals eight times.

RHS’s most recent Poetry Out Loud success story, senior Danielle Hill has carried on the school’s Poetry Out Loud legacy competing in  regionals and states both this year and last year.

How is the Poetry Out Loud experience for students? Hill cites memorizing the words of her poems and being able to recall them on stage as one of the more challenging aspects of competing.

“You get on stage and you look out at all those people, you get a very large shock of ‘Oh my God! What are all those words?’”

Her favorite part is listening to others and seeing what they chose to recite. “I like hearing what other people brought to the table,” says Hill.

Other than great experiences Hill has also learned some valuable lessons from  POL including being okay with the way her performance turns out no matter what, as well as the concept of dedication.

“There’s a lot of words to continuously remind yourself about over the course of the months,” she says.

Hill’s success has added to Rockland’s fabulous reputation in the Poetry Out Loud competition state-wide.

“I feel honored. I’m glad that I was able to bring some type of prestige to Rockland even though I did not get as far as I was hoping,” says Hill. “I’m glad I was able to represent Rockland.”

Although it is students who perform in Poetry Out Loud, Rockland’s achievements would not have been possible without the assistance and leadership of RHS English teacher, Amy Woodward.

“I was adviser to the Poetry Club when the invitation to participate first came. I thought it would be something fun for the club members to do,” says Mrs. Woodward of the beginnings of RHS’s POL accomplishments.

“Most of them disagreed about the ‘fun’ part, actually, but one of them was Gabi Guarracino, who discovered a remarkable talent that ended up taking her to state finals three times and the national finals twice. She also credits the program with getting her into Harvard.”

Since then, Guarracino has served as a model for students participating in the competition.“I was, at first, pretty astonished to see how good Gabi was at this — what a great stage presence she had, and how naturally and intelligently she could communicate the essence of a poem. Then it just became pure pleasure to see her every time she performed,” says Mrs. Woodward.

“It was a great advantage to have worked with her and seen two national finals when, after she graduated, the other teachers and I were preparing new students to compete. She was a wonderful model of the qualities that lead to success in the competition.”

Hill credits Woodward with being the reason for her interest in POL.

“She [Mrs. Woodward] was the person that came to me and told me that I had to do Poetry Out Loud. I had never even really thought about doing Poetry Out Loud but she talked to me about it and really inspired me to get into it,” says Hill.

Rockland High School’s involvement in Poetry Out Loud started out as something new and exciting for members of the Poetry Club; over the course of the competition’s 10 years it has blossomed into something that students look forward to each year.