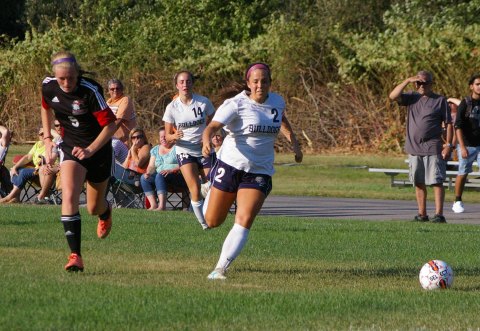 Grace Oliver scored over 100 points this year for Rockland.

Despite incredible plays from the volleyball team, and delicious all you can eat pizza in the gym, it was the girls soccer team that took center stage in an incredible quarterfinal tournament game against Plymouth South. In the frigid cold, under the lights in Veterans Memorial Stadium, the Dogs battled to a double overtime 2-1 victory.

The game ended on an incredible strike from senior captain Grace Oliver from way out to secure the victory in golden goal fashion. As the ball settled in the back of the net, the Dogs sprinted onto the field to celebrate their win, a moment senior captain Jaymie Atkins won’t forget.

“My favorite moment was when we scored in double overtime to move on to the third round of the tournament. I just remember running onto the field to hug everyone,” said Atkins.

The girls soccer team had an impressive season and their incredible tournament run topped it all off. Unfortunately, they lost in the semifinals in another double overtime game to Dover-Sherborn on Thursday night, Nov. 9.

Coming just one game short of the South Sectional finals the girls continue to keep their heads up in reflection of their season.

Junior captain Meghan Dion says, “I think we really put our hearts into the game and tried as hard as we could. It is unfortunate the way it ended but we did everything we could.”

The Dogs had their ups and downs during the season, but they were able to put them all behind when it mattered most, in the tournament.

As the Lady Dogs had a remarkable season, senior captain Grace Oliver had a lot to take away from this one, her last. One of Oliver’s favorite moments of the season was beating Hanover in a 2-1 victory in their first round tournament game, after losing to them two times in the regular season.

Oliver has been an important piece in the program since her freshman year with over 100 points in her career. As all good things come to an end Oliver wishes the girls the best of luck next year. “I’m so proud of my team. I hope they can make it farther next year. I wish them luck. I’m gonna miss all of them so much!”

The girls wish the same good luck to  Oliver as she will take her phenomenal talent to UMass Boston next year.

The Lady Dogs had four South Shore League all-stars this season in senior Oliver, juniors Madison and Nicole Blonde, and freshman Hannah Rich. Oliver and Madison Blonde were also EMass all-stars. With three of their four all-stars returning, the girls have high hopes that they will continue to have plenty of talent and success next year.

Although fall sports have come to an end, the Lady Dogs and Bulldog Nation can’t wait for next year to see what the team has in store.

The girls soccer team honored their seniors on Oct. 23 before their game against Norwell, a tough 2-1 loss.

Jaymie Atkins and her parents, Brenda and John Atkins.

Grace Oliver with her parents, Jean and Bob Oliver.

Erin Field with her parents, Caroline and Lee Field. 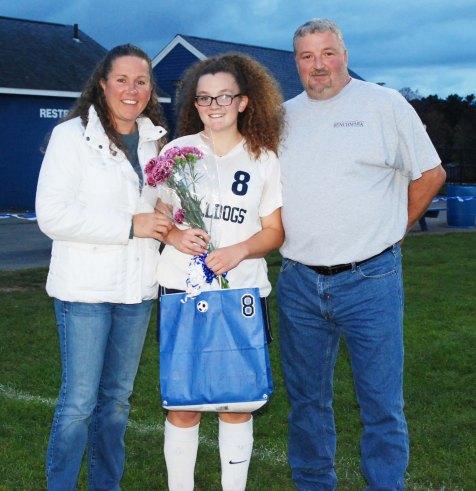 Sydney McKenna with her parents, Sheila and David McKenna.