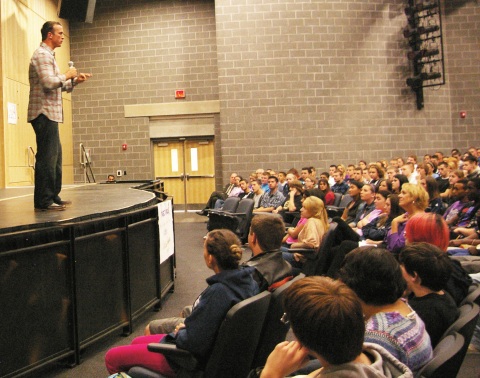 Now, an eye opening public speaker, Herren goes to schools across the country, telling his story, and hoping to help one person each time to avoid drugs, alcohol, and other addictive behaviors.

At a Rockland High School assembly on September 26, Chris Herren spoke and, for once, there was silence in the auditorium. All were listening to his gripping account and tears streamed down the faces of those who were deeply touched by his story. Others were so captivated that they could not move their eyes off the stage, except of course when a cell phone went off while Herren was talking about a phone call he received about his football player friend’s murder.

Herren began by describing his first exposure to cocaine in his freshman year of college, when he allowed himself to be lured in by peer pressure. Seven years later, he was exposed to oxycontin and became addicted. Then, forced to play basketball in Italy after being let go by the Boston Celtics, he became desperate for a fix. The only way Herren could communicate with drug dealers was to roll up his sleeve and point to his vein. This was the first time he used heroin. Chris Herren described how he lost millions of dollars because of drugs; he lost his dream in basketball and was reliant on drugs to get himself through life for fourteen years. Through the births of his first two children, Chris and Sammy, he was under the influence, missing two precious moments in life. The birth of his son, Drew, was the last day he abused any kind of substance.

Of the assembly, junior Brian Leonard said, “I thought it was very moving and it made me never want to do drugs.” “People were sad and moved by the story,” said freshman Shelise Dutcher.

In a startling piece of his talk Herren described how he almost died of a drug overdose. He said he was proclaimed dead at the scene, but because one of the paramedics knew him, the EMTs did not give up. They continued to try to resuscitate him and he finally came back to life. Herren also told how he once tried jumping out in the middle of the highway in front of a car in order to commit suicide. The car swerved around him.

From there, he was given the chance to go to a treatment center for five days by a nurse who felt as though Herren’s mother was calling out to her. Soon thereafter he was called by an NBA player friend who paid for six months of rehab which ended up saving his life. “I think the fact that he is still alive is remarkable,” Brian said, “because he almost died a couple times.”

Now, Herren, sober since August 1, 2008, is an incredible public speaker, speaking across the country, trying to touch just one person each time he speaks. He mentioned one seventeen year old girl, whom he met after his talk at her school. She wanted to come clean about her cutting, and show her bullies how they had harmed her; she has not cut for twenty-eight months.

Changing peoples’ lives seems to be what Herren does best. One in nine become substance abusers, as Chris Herren said in the presentation, which made many turn their heads in the auditorium to exchange glances with their classmates and friends.

“It was a good presentation,” according to Shelise Dutcher. “I liked the way he got so serious”. His serious manner and way of speaking appears to have affected students.

The reaction was tremendous, as seen throughout the school through word of mouth and social media. Jenny Swider from The Herren Project said as a rule The Herren Project does not provide specific numbers but that their office did field multiple emails as a result of the Rockland High School presentation.

Students may still contact Chris Herren through either of his two websites: http://www.theherrenproject.org http://www.ahoopdream.com