Class President Dennis McPeck led the opening ceremonies and introduced Social Studies teacher Richard MacAllister who spoke to the seniors.  MacAllister commended students for their courage and compassion throughout their senior year in which three of their classmates, Joshua Rose, Patrick Sullivan and Jared Quirk, passed away. MacAllister ended his address with a quote from Franklin D. Roosevelt:  “”Success is not final; failure is not fatal. It is the courage to continue that counts.”

Dr. Alan Cron, principal of RHS, next addressed the seniors.  He too commended the seniors for their compassion telling them to “keep being about people.”  He then called the families of the three deceased class member to receive their diplomas.  Dr. Cron next announced the long list of scholarship winners whose awards totaled almost $150,000.

Next, Alyssa Collins, class valedictorian, addressed the class.  She spoke of the necessity of change in life and urged her classmates to embrace it while remembering the people who have supported them.

Collins was followed by Superintendent of Schools, John Retchless and Chairman of the Rockland School Committee, Richard Phelps who awarded the diplomas to the seniors.

Vice President Alex Pigeon announced the Class of 2015 gift consisting of three memorial trees and a bench to be placed outside the front of the building.  Class of 2016 Vice President, Abigail Kinlin received the gift.

Dennis McPeck closed the ceremonies with a special thank you to the faculty and staff at Rockland High School who supported the seniors thoughout their four years.  McPeck then took a class selfie and called for the traditional cap toss.  Led by Junior Marshals, Kinlin and Kevin Levesque, the Class of 2015 filed out of the stadium followed by family and friends.  The last to leave the field was Class Advisor, Sam Hoyo who oversaw the entire senior week activities and made sure that this final ceremony went on seamlessly. 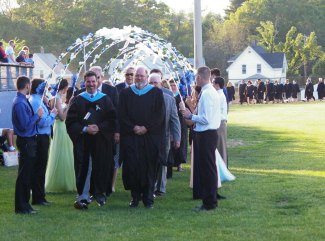 Kevin Levesque and Abigail Kinlin lead the Class of 2015 procession.

Joseph Pumphrey, Cam Stuart and Jenna Novio are ready for the bright lights. 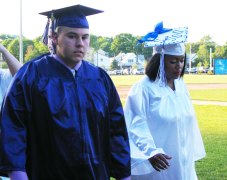 Alex Pigeon and Dylan Bernache file in for graduation ceremonies.

The Class of 2015 stands for the National Anthem. 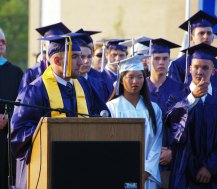 Seniors listen to Mr. MacAllister’s address to the class. 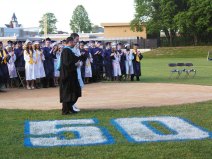 Mr. MacAllister leaves the podium after his address to the class.

Dr. Alan Cron, principal, addresses family and friends of the graduates in the stadium.

Pearse McNally is pleased with his scholarship awards!

Cameron Kelly stands to be acknowledged for his scholarship awards.

Richard Phelps, chairman of the Rockland School Committee speaks to the seniors. 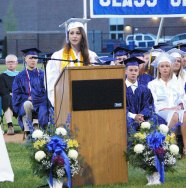 Alyssa Collins, Valedictorian of the Class of 2015.

Senior Matt Bille walks up to the podium to receive his diploma.

Danielle Hill proudly walks up to receive her diploma.