Macbeth: the murder of Banquo and Banquo’s ghost returns

The Cast of Macbeth Veritas Photo

The cast of Macbeth huddles up.

Aiden Glennon as Banquo is murdered by the murderers sent by Macbeth. From left they are Joe Naughton, Adam Dalton and Sabrina Sprague. 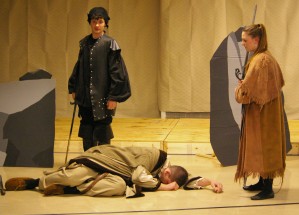 Navaeh Clara as Lady Lennox and Chris Penney as Ross

Shandi Austin is not happy with the murderers who let Fleance escape. 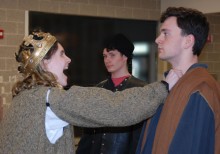 Shandi Austin as Macbeth is not happy to learn that Fleance has escaped. Joe Naughton plays one of the murderers and Adam Dalton plays another. Veritas photo

The ghost of Banquo comes to dinner.

Banquo confronts Macbeth at the banquet.

Lords and ladies are not aware of the extra guest at the banquet.

“Do not shake thy gory locks at me,” says Macbeth. Shandi Austin is Macbeth and Aiden Glennon is Banquo

Eden Dalton as Lady Macbeth and Shandi Austin as Macbeth at dress rehearsal for the Shakespeare Festival. Veritas photo

Kellie Berry as Mercutio and Ryan Struzziery as Romeo 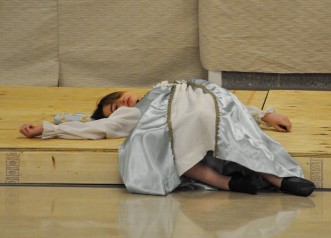 Juliet will sleep for 42 hours and awake in the Capulet’s tomb.

Hamlet: To Be or Not to Be soliloquy and Get thee to a nunnery scene 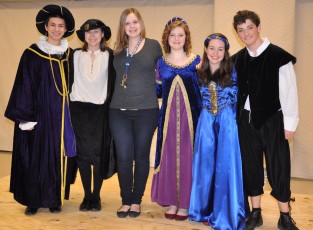 Hamlet receives his letters from Ophelia

Hamlet tells Ophelia that he never loved her.

Hamlet advises Ophelia to get to a nunnery!

A Midsummer Night’s Dream: The Play within the play 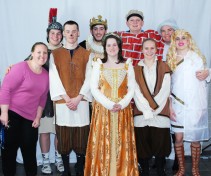 Ms. Walsh and the cast of A Midsummer Night’s Dream 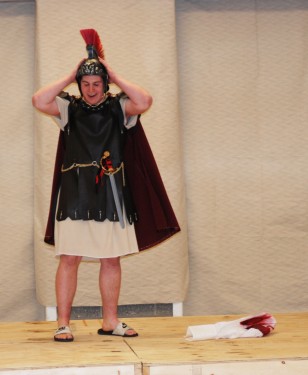 Harry O’Brien is afraid he has lost his love, Thisbe

Thisbe discovers Pyramus and kills herself too.

Pyramus asks if the king would like to see another scene.

The cast of A Midsummer Night’s Dream take a bow.