The Music Department’s production of Annie on April 5 and 6 was a hit with large audiences on both Friday and Saturday afternoon. Directed by Michelle Booth and Victoria McComb and after months of practice and rehearsals, the cast came together to pull off the singing, dancing and acting needed to make a great show.

Below are Veritas photos from dress rehearsal and from Saturday’s performance.

Before Saturday show Sadie and Mikayla get ready 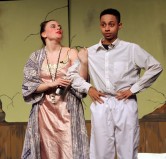 Miss Hannigan and the orphanage girls who love to torment her! Veritas photo 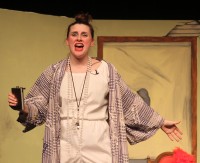 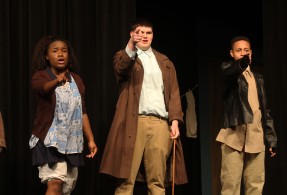 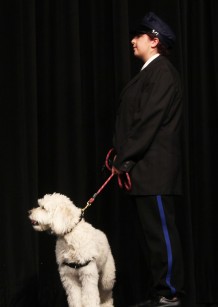 Olivia Janis and Sadie as Lt. Ward and Sandy

Mikayla Andre and Sadie at Saturday matinee performance of Annie. 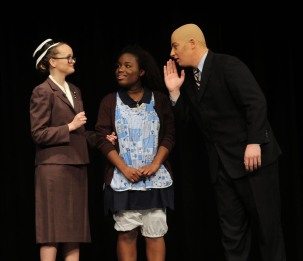 Jordan Cunningham, Bonnie Gasdia and Mikayla Andre in a rehearsal of the musical Annie on Weds. night. Veritas photo

On their way to the movies

Olivia Janis, Nelah Dunn and Emily Gaboriault as Lily, Rooster and Agatha are ready for their plans to make $50,000.

Annie packs to go with the Mudges while Daddy Warbucks and Miss Farrell look on.

Saturday: Emily and the girls

The finale of Annie in the dress rehearsal on Weds. night.

The orphan girls are happy that Annie will be adopted by Oliver Warbucks.

The Mudges are apprehended as frauds by Oliver Warbucks.

Taking their bows on Saturday.

Jordan jumps for joy on Saturday

The full cast of the musical Annie