With the end of another fantastic sports season, the school as a whole is making its way into the newest set of sports. However, that should not overshadow the great seasons each winter sports team had this year. From boys and girls basketball, to hockey, let’s reflect on each team’s success and look forward to how these teams bounce back next year.

The boys varsity basketball team had a great finish to their season. The team went 6 and 1 behind their senior captains Hunter Wardwell, and Patrick Moriarty, who was also SSL Sullivan Division player of the year. Their season, although cut short two weeks due to close contact tracing, was still a major success for the program. “Yea the masks definitely had a set back on our season and on our conditioning but luckily enough each and everyday we came ready to work and improve not only our game but our conditioning. At times we didn’t feel like a team at times because not being able to go into the locker room or the new rules but we fought through some adversity and made the best out of a season.” Senior captain Hunter Wardwell had high praise for the team through the adversity of the season.

They won their quarterfinal game against East Bridgewater after three weeks of no action, showing they still had it in them. However, their semifinal game against Abington ended in defeat, ending their season.

This is nothing to be ashamed of, as the Bulldogs had an amazing season and look to bounce back next winter season. The seniors leaving the program this year are Patrick Moriarty, Hunter Wardwell, Derrick Williams, Joey Nguyen, Cullen Rogers, Zach Ofurum, Bryan Colarusso, Jack Reis, and Evan Burke.

Coach Fred Damon was honored as the Coach of the Year in the Sullivan Division. 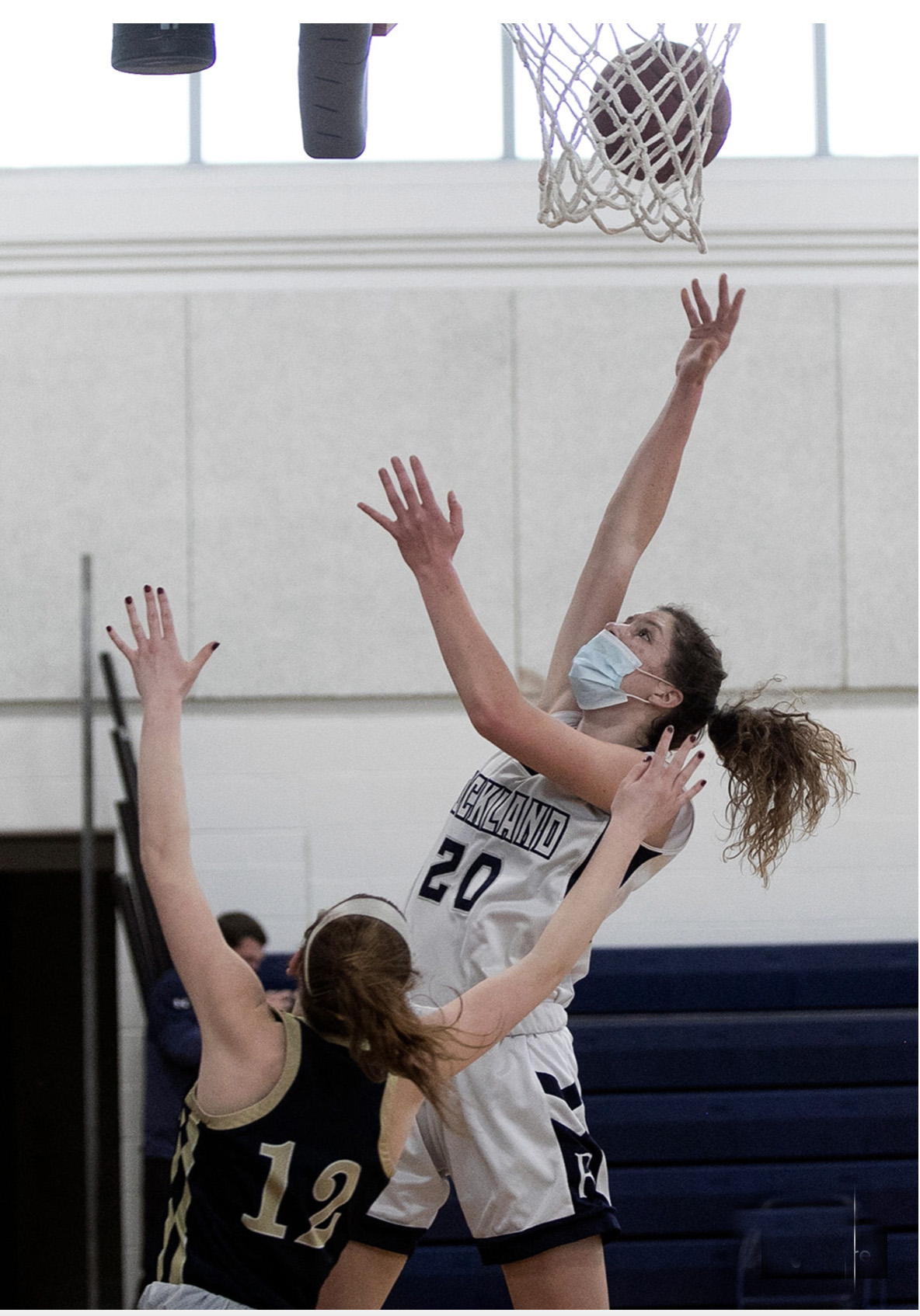 Julia Elie had a big game against East Bridgewater in the playoffs.

The girls varsity team also had a great season, going 9 and 4 in total. They lost in the semifinal as well, to Norwell, but that does not overshadow the great season they had. Junior captain Julia Elie said about the season, “It definitely took some getting used to, with the no fans and all the protocols but we were all just grateful to actually have a season and be able to play, considering most teams either got shut down or had their season canceled.”

Freshman Maggie Elie, Julia’s sister, had a good year taking over as the team’s point guard for her sister Caroline who graduated last year. Also playing well were sophomore Sydney Blaney, starting for the second year, and sharp-shooting sophomore Charlie Kelleher. Sophomore Emma Cameron rounded out the starting line-up and sophomore Maddie Hermenau was a force off the bench.

The team led by their All-Stars Julia Elie, Charlie Kelleher, and Maggie Elie had a fantastic season, and are poised  to have another successful year with the same roster coming back next year.  There were no seniors on the roster this year, but Julia Elie, Maddie Murphy, Jordan Stec and Carolayne Lage will provide the team with senior leadership next year.

Nick Blonde with his mother and father after the final game in which he scored his 100th point.

Finally, the boy varsity hockey team had a great finish to their season. The team led by their senior captains Nick Blonde, Zack Phripp, Thomas Mcsweeney and Nick Leander, finished their season with 6 wins,  5 losses and one tie.

They got  a win against Abington, 5-3 in their last game in which senior captain Nick Blonde scored his 100th High School point with 2 seconds left on the clock.

The team was not able to compete in the SSL tournament at the end of the year however, as the team was on a 2 week hiatus due to COVID-19 protocols. However, overall this was a great season and the team looks to bounce back and compete next year. Senior captain Nick Leander said, “It went pretty good I thought. We didn’t get shut down till the end of our season due to COVID. Even though we weren’t able to compete for a league championship we still got to come back for a final 2 games to end of our season which was good to finish at .500. It was difficult sometimes cause you could never know when you could be playing due to other team could shut down that day or day before, but it was great having the opportunity to play.”

Posted on March 6, 2021, in Sports. Bookmark the permalink. Leave a comment.