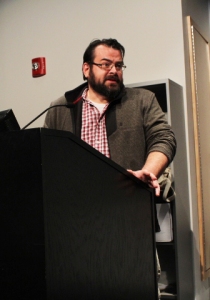 Eight RHS seniors presented in last night’s annual Spellman Oratorical Contest competing for the $4,000 in prize money. This annual event was hosted by the English Department Director, Caroll Cahill and was held in the RMS/RHS Lecture Hall.

The theme of last night’s competition was The Art of Darkness:  Evil, Pain and Enlightenment. The speech contest begins with a written essay in senior AP Literature and Composition class led by Chris Neal. The assignment’s objective is for students to use past and present literature and art to develop their thesis.

Each of Neal’s 18 students were required to submit a 500-1,000 word essay pertaining to the theme. From there, eight students were selected to participate in the oratorical portion of the contest. Here,  three outside judges, Karen Bonn, Amelia Füss, and Laura Whittaker, evaluated the speeches for content, delivery, poise and diction.

Here is a link to the video of last night’s competition.