In Hyannis on March 5th, seventeen Rockland High School students and one faculty member plunged into the freezing cold water in support of the Special Olympics. Five other students and one more teacher cheered them on as they braved the water.

As a part of the Massachusetts Association of Student Councils leadership conference, students were able to support Special Olympics by participating in the Polar Plunge. Students supported and participated in this event by raising money, cheering, and/or by simply putting one toe in the water.

Senior Jackie Carlson raised money and cheered on her fellow student government council members as they ran into the icy water. She had a great time and would “definitely raise money for the Special Olympics again.”

Some students went above and beyond to support the Special Olympics. Sophomore Caitlin Yannizzi raised more than five hundred dollars. English teacher, Kristen Walsh, freshman Jeffre Donahue, sophomore Lexie Carchedi, juniors Dennis McPeck and Jenna Novio, and senior Molly Garrity fully submerged themselves in the freezing water instead of just going up to their ankles or waists.

Sophomore Johnny Murray found the Polar Plunge to be fun even though it was cold. His only regret was not going all the way under.

Freshman Adam Royle and Donahue were veterans at plunging into the freezing cold water, having plunged previously at Rexhame Beach in Marshfield on New Years Day. However, they enjoyed this one better because they were able to be with a larger group of friends and in a better atmosphere. 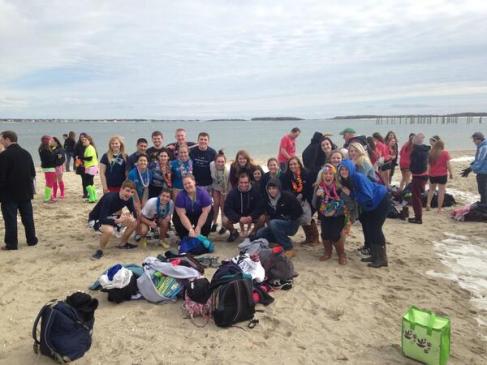 First time plunger, senior Brian Leonard would without a doubt participate in another Polar Plunge after finding this one to be “a fun experience.”

Aside from plunging, students were able to participate in other events. People from other schools dressed in creative costumes to take part in the costume contest that took place before the plunge.

Students were also able to take part in pledging to the “Spread The Word To End The Word” campaign. This is a campaign designed to end the use of the r-word in a negative and inferior manor. By pledging, many RHS students became a part of the inclusion revolution.

Last Wednesday, students from Rockland participated in the Polar Plunge in order to support a good cause, the Special Olympics. Whether they plunged, raised money, or cheered each other on, they braved the elements to have, like Leonard said, “a fun experience.”

Posted on March 11, 2014, in Uncategorized. Bookmark the permalink. Leave a comment.